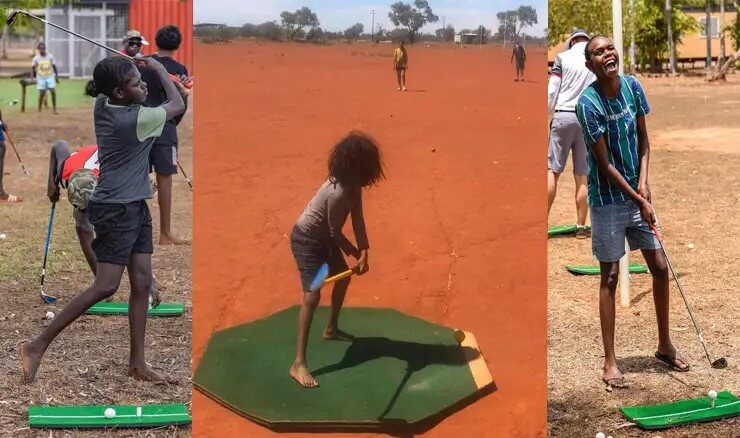 A Truly Remote Search For Our Next Golf Champ

Taking an 18-hour road trip with 12 crossings through crocodile-infested waters is a lot to ask to have a hit of golf.

But not for Peter Hargreaves, who routinely fills his four-wheel drive with golf clubs, balls and mats for the Northern Territory’s indigenous children to experience the sport.

Next month, he’s off to Ramingining in Arnhem Land.

“I’m looking forward to it because I think it’ll be an unreal experience,” Hargreaves said of the more than 800km journey east of Darwin.

Hargreaves is the regional development officer for Golf Australia Northern Territory and has two main objectives.

Firstly he wants to get indigenous kids in the Northern Territory’s remote communities playing golf.

Secondly, he is determined to find Australia’s next superstar.

“The carrot for me is to try and find indigenous kids that’ll end up representing Australia,” he said.

Hargreaves started in the role 14 months ago and two weeks in, he was asked if he knew any golfers to form an indigenous team in an under-15 schools’ tournament.

Hargreaves has since searched far and wide.

With help from Northern Territory government funding, last year he ran clinics as far afield as the Tiwi Islands, north of Darwin, Groote Eylandt, 50km from the mainland in the Gulf of Carpentaria, and three trips to Yarralin, more than 700km south of Darwin.

In every clinic, many of the kids stood bare-footed in the red dirt and launched golf balls from a mat.

It is not your typical driving range, but the talent on show blew Hargreaves away.

“There was one girl (in the Tiwi Islands) who tried it right-handed and then turned around and hit it left-handed and I couldn’t tell the difference,” he said.

“And when it came time to go collect the balls from the oval, the kids started hitting them one-handed straight through the goalposts.

“You’ve almost got to have eyes in the back of your head because you’ve got three or four kids calling out, `Sir, Sir’ at one time because they want to show how talented they are.”

But getting children and others in remote communities to engage can be difficult.

PGA professional Stephen Tieck regularly visits Arlparra and other communities from his Alice Springs base. And even with his vast experience, it took Tieck multiple trips to make eye contact or speak with his students.

Tieck is one of the many passionate Territorian volunteers who help Hargreaves by visiting remote communities and sometimes even bringing kids to the city.

Volunteers organise bus loads of indigenous children to visit Alice Springs and Katherine to play on a real golf course, a “luxury” only those attending city schools would otherwise have.

And, for so many kids in the NT, the lure of football remains strong and another hurdle to ongoing involvement with golf.

Despite these challenges, Hargreaves said “there is no doubt” that Australia’s next golf superstar could be an indigenous boy or girl from a remote NT community.

And he’s happy to keep driving through some of the world’s most dangerous river crossings in order to find them.