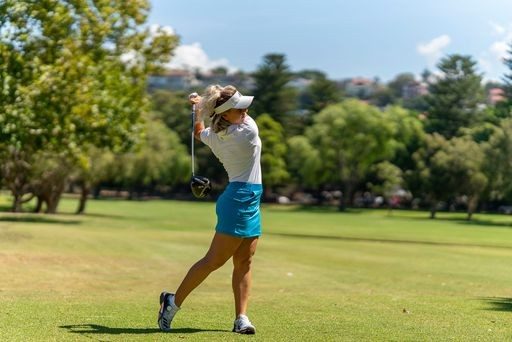 Stephanie Kyriacou will arrive at the LPGA Tour’s Q-Series with a bolstered bank balance after ending the Ladies European Tour season third on the Order of Merit. Fourth in the Race to Costa del Sol standings heading into the Andalucia Costa Del Sol Open De Espana season finale, Kyriacou closed with a round of three-under par 69 that had periods of wild fluctuations. The recently turned 21-year-old burst out of the blocks with three straight birdies to start her final round before dropping a shot at the par-3 fourth. Further birdies followed at six and eight yet a double-bogey at the par-4 ninth sent Kyriacou into the back nine two-under on her round. The final nine holes of the season was more subdued with a lone birdie at the par-4 13th enough to elevate Kyriacou into a share of fifth, 10 shots behind runaway winner Carlota Ciganda. Her eighth top 10 of the year moved her ahead of Finland’s Sanna Nuutinen by just 107.97 points and triggered a €50,000 ($A79,459) share of the bonus pool awarded to the top three finishers on the Order of Merit. The top-five on the Order of Merit also receive exemption into the LPGA Tour’s Q-Series starting in Alabama next week, opening the door for Kyriacou to potentially play both tours in 2022.

“I’m happy I played well and got third, also happy I have the opportunity to go to the States and try to get on the LPGA Tour,”  said Kyriacou, who has played 22 events on the Ladies European Tour this year.
“It is going to be a quick turnaround with getting over the jet-lag, but the important thing is I have the opportunity.
“If I got status on both tours, I would probably do a bit of both – it depends on which tournaments clash with what. We will figure that out when the time comes.”
Although a Sunday 76 was not how she would have liked to have signed off it also marked the end of Whitney Hillier’s most consistent season, the West Australian finishing tied for 23rd in Spain to end the year 45th on the Order of Merit.