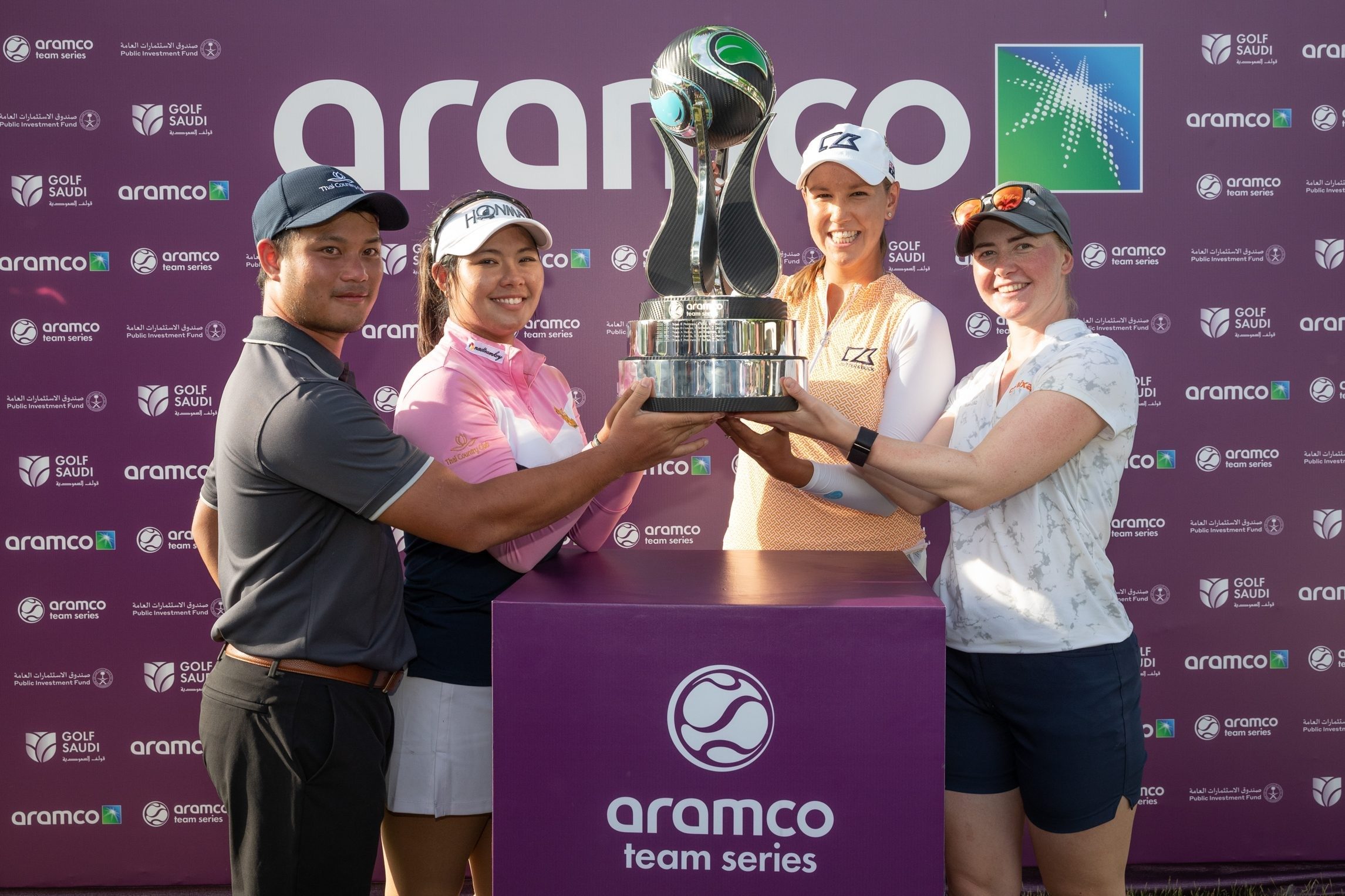 Team Hillier triumphed at the Aramco Team Series – Bangkok as they recorded a final round of 15-under-par to secure a three-stroke victory at Thai Country Club.

After starting the day in front, Whitney Hillier, Chonlada Chayanun, Krista Bakker and amateur Pattanan Amatanon backed up their excellent first with another great round to seal victory on -31 at the Aramco Team Series – Bangkok.

It was a first LET title for Hillier and Chayanun, while it is back-to-back victories in the Team event as Bakker was part of Team Pedersen in Jeddah last November.

Captain Hillier said: “I'm so proud of my team. Even from the start of yesterday morning we just had a good vibe. Everything just flowed and obviously we played great golf, but we had a lot of the fun, so that was the most important thing too.

“This is my tenth year on tour, and for my first win to be in a team event, like that's pretty cool. I'm just looking forward to tomorrow too, now.”

Bakker added: “It’s great to be here winning again. We had so much fun and as Whitney said, yesterday we started to play good right away and making birdies.”

It was a fantastic day for Chayanun, whose home club is Thai Country Club, in the Individual competition as she carded a 67 (-5) to help her team and climb up the Individual leaderboard.

“I'm just happy,” she said. “I never thought about winning and we did it as a team, so I’m really happy. I'm so proud of my team.

“Everything was perfect today. I made so many pars and had like eight birdies, so that's the secret. I got so much good energy from my team. They are really supportive, so that just made me keep going.”

Amateur Amatanon added: “It's surreal. I couldn't believe it. I'm dreaming. It's just amazing to play here yesterday and today, and it really feels like a team effort. Krista had an amazing day yesterday and Chonlada had an awesome day today. It was all so amazing.”

While Team Tavatanakit was third with a total of -26 and one shot further back in a tie for fourth place were Team Moriya Jutanugarn and Team Lampert.

In the Individual competition, Patty Tavatanakit signed for a round of 69 (-3) to be nine-under-par after 36 holes at Thai Country Club.

The Major winner rolled in birdies on seven and nine before dropping a shot on the 12th, but the Thai star rolled in back-to-back birdies on 17 and 18 to hold a two-shot lead heading into the final day.

“It was pretty good,” said Tavatanakit. “Walking off the course without my A game and being on top of leaderboard is always a nice feeling.

“If anything, just seeing a little bit of confidence that I left a lot out there and a lot of things could be improved tomorrow. I didn't really have the right flow today, but I stayed patient and a couple putts dropped at the end so that helped a lot.”

England’s Felicity Johnson and Belgium’s Manon De Roey sit two shots off the lead on seven-under-par having fired rounds of 68 and 67, respectively.

“I played nicely and played really steady, I’m happy with my rounds from today and yesterday,” said Johnson. “I hit a lot of fairways and greens.

“Myself and my caddie did a lot of good work at the start of the week of where we’re trying to hit approach shots and to figure out the grain as the ball is making its way to the hole on the greens.”

De Roey said: “I feel great, I was just playing for the team today and trying to make as many birdies as possible. Last week I wasn’t playing my best golf, but I was able to make a lot of birdies and that built my confidence for this week, and I feel a bit more comfortable.”

Two-time Major winner Ariya Jutanugarn is on six-under alongside Sweden’s Johanna Gustavsson with five players in a tie for sixth place on five-under including Scotland’s Catriona Matthew, who fired the best round of the day with a 66.

“I haven't been playing much or practicing so didn't quite know what to expect,” said the two-time winning Solheim Cup captain.

“I played well today, and I putted well. Kind of every little thing everything went for me. I’m disappointed in my finish. As a golfer you're never too thrilled, but overall delighted.

“I picked out a new putter just before I came here and that's been working so well. My caddie reads the greens great, so I just leave it to her, and she just points, and I try and hit it where she says.”