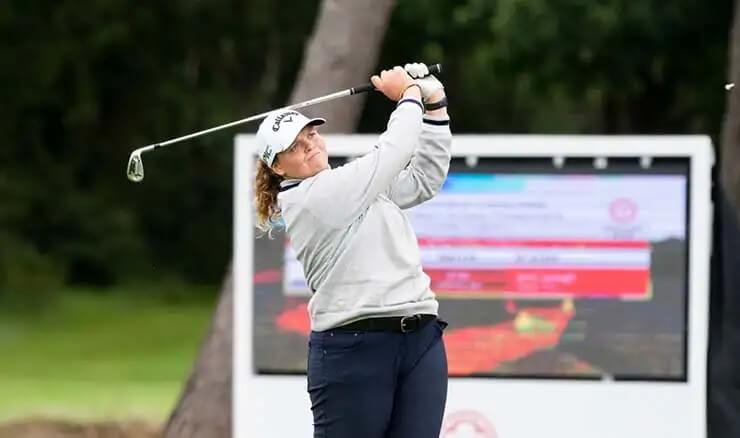 Australian Kirsten Rudgeley came out on top of a topsy-turvy contest as she defeated Bel Wardle in a thrilling final of the English Women’s Amateur Championship. Rudgeley produced a magnificent pair of birdies on the 35th and 36th to keep herself in the final before a third birdie putt in succession on the first extra hole sealed the title to spark wild celebrations for her and her family.

Two Western Australians made the finals, with Joondalup's Tom Addy losing the men's amateur to John Gough at Moortown Golf Club. This time, though, the glory went to Rudgeley and she was delighted with her comeback victory and praised the support of her mother Donna who caddied for her all week and was instrumental in her success. “It’s fantastic to have Mum with me as I go round, she’s a great support for me,” Rudgeley said. “Dad rang me as soon as the match finished as well and I’m sure I’ll be getting messages from the family all night! “It’s an awesome feeling to lift the trophy. The way I held myself together at the end there was good in a tough situation. “I felt like I hit a lot of good putts today and some of them just weren’t quite falling in but I had a good thought that they would fall in towards the end of the match and fortunately they paid off. “Even when I was 3 down and Bel was playing well, I just tried to stay positive and keep believing that it was anyone’s game to win. I started striking the ball better on the back nine and that helped my game a lot.”

The match started in gloomy conditions at Moortown with an 8.45am tee-off time for the first round and it was a nervy start for both players under the Yorkshire clouds. The game was all-square after 10 holes before Rudgeley’s putter became red hot. She won four holes on the bounce between the 11th and the 14th to put herself into a commanding lead but Wardle wasn’t about to let the final run away from her. Two birdies and a solid par saw the Cheshire player claim three holes back before the end of the first round and she went into the interval with all the momentum and only a one-hole deficit. Wardle had swung the tie in her favour and she kept that positive energy going after the break. She birdied the first three holes of the second round to go from 1 down to 2 up in the blink of an eye and all parts of her game were looking terrific. The pair exchanged two holes apiece either side of the turn and with only two holes to play, Wardle still held a 2 up advantage but then, Rudgeley made her move. First, she birdied the par-three 17th to keep herself in the contest and as the pressure ramped up a notch, she made her way to the 18th in front of a large crowd by the green in the late Sunday afternoon sunshine. Any sign of nerves didn’t show, however, as she produced another outstanding birdie putt to send the game to an extra hole and leave Wardle wondering quite how she hadn’t yet picked up the trophy. Both players drove superbly down the fairway but it was Rudgeley who grabbed the advantage when she chipped onto the green in three. Wardle putted out for five and left Rudgeley with a short, but still tricky, putt to win the title. She duly sent the ball on its way and into the hole to ensure she followed up her Scottish Women’s Open trophy with another impressive success at Moortown.

Image: Kirsten Rudgeley on her way to a brilliant win in the English Amateur by Leaderboard