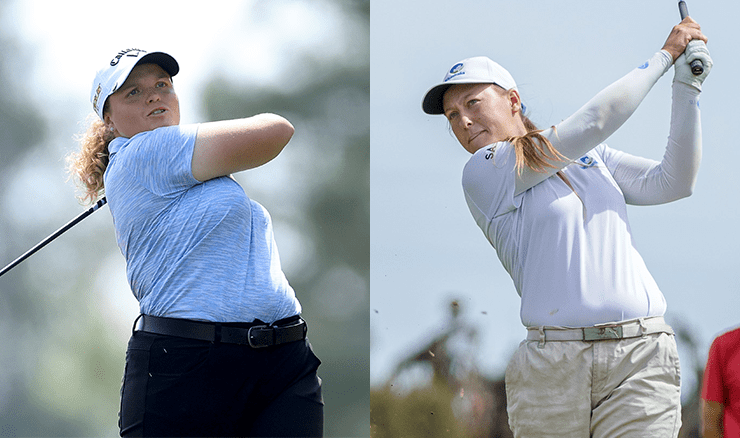 West Australian Kirsten Rudgeley and South Australian Caitlin Peirce are the recipients of the Karrie Webb Scholarship for 2022.

The scholarships are awarded based on performance in the Karrie Webb Series, the World Amateur Golf Rankings, community work inside or outside of golf and performance and demeanour as an ambassador for golf in Australia and overseas.

Rudgeley, 21, has received the award for a second straight year, while Peirce, 19, is a first-time recipient

At number 40 in the World Amateur Golf Rankings, Rudgeley is Australia’s highest ranked amateur golfer and earlier this month she recorded the best ever finish by an Australian at the Augusta National Women’s Amateur coming in a tie for eighth.

This year alone the Mount Lawley member has won The Athena against professionals, the Avondale Amateur and finished in a tie for seventh at the Vic Open.

Last year with the assistance of the scholarship she was able to travel to the United Kingdom where she earned a major debut at the AIG Women’s Open after her stunning form from winning the English Women’s Amateur title and the Helen Holm Scottish Women’s Open carried over to qualifying.

“It helps a lot,” said Rudgeley. “It’ll be great to meet Karrie in person this year. It’s all organised now, but last year we couldn’t make it happen because of Covid. She sends me messages every time that I play well or do something in a tournament, so I’m looking forward to some face-to-face contact with her.”

Peirce, who calls Royal Adelaide home, was the best performing player in the Karrie Webb Series which included her victories at the Tasmanian Open Championship and the Rene Erichsen Salver.

Those triumphs were part of a breakout season where she also had top-five finishes at three other events within the Series - the Australian Amateur, the Riversdale Cup and the Avondale Amateur.

“I’m so happy to receive the scholarship. It’s great that Karrie has set up this amazing opportunity for Australian athletes. It’s definitely very helpful and it’s great that she has had it for so long as well,” Peirce said.

“To receive this has only really been a goal of mine for the past couple of weeks during the last few events of the series. It hadn’t been something I’d thought about before because I’d probably never played well enough for it to be on the radar. It’s like a nice bonus to finish off how well I’ve played in recent times.”

The two recipients - who roomed together on a Golf Australia development trip to New Zealand last year - will receive mentoring and guidance from the great Karrie Webb, winner of seven major championships and five Women’s Australian Opens among more than 50 titles worldwide. They will also receive funding to cover travel to play in overseas tournaments this year.

Past recipients have spent time with Webb at an LPGA Tour tournament as well as practising with her, and this year Webb has major plans for them.

“I’m thankful that the 2022 KW Series was able to go back to being competed the way it had been pre-covid. With tournament golf back in full swing, this year’s Series proved to be one of the most exciting and both scholarships came down to the very last week,” Webb said.

“I think it goes to show that the depth in women’s golf in Australia is definitely improving, with up to 7 or 8 women with a chance to take one of the two scholarships in the closing week. I’m excited that after her 8th place finish at the Augusta Women’s Amateur that Kirsten Rudgeley will again be a scholarship winner for the second time. The Aussie Am proved to be an exciting finish with Caitlin Peirce finishing 5th which was enough to top the Series points list.

“I’m looking forward to having both girls over to the US this year to play some golf and watch the KPMG Women’s PGA at the end of June.”

The Karrie Webb scholarship dates to 2008. Past recipients include the likes of major champions Minjee Lee and Hannah Green, and LPGA Tour star Su Oh.

Find our more about the Karrie Webb scholarship here.