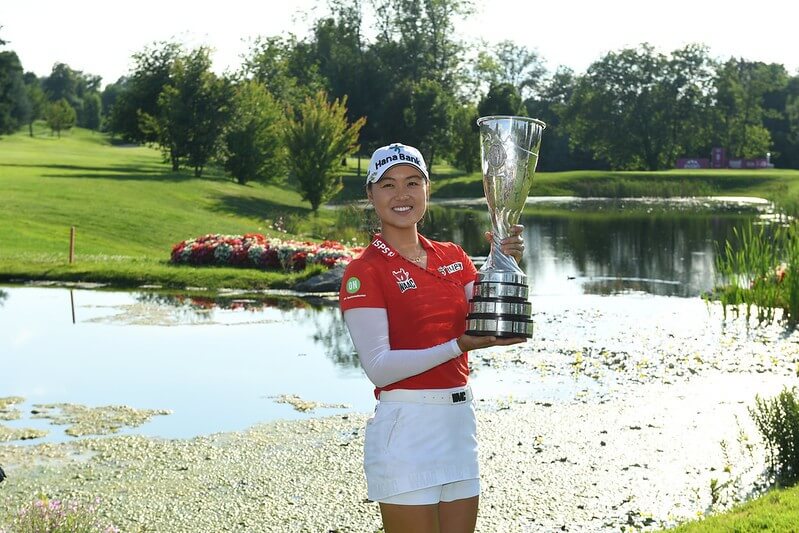 In a comeback for the ages, Australian Minjee Lee overcame a seven-stroke deficit to win the 2021 Amundi Evian Championship, shooting a bogey-free 64 in Sunday’s final round and winning a one-hole playoff with 54-hole leader Leongeun Lee6.

After birdieing four of the final five holes to reach the lead, Lee, a 25-year-old from Perth, hit the approach of a lifetime in the playoff, a 6-iron from 190 yards that nestled to within 8 feet for eagle. After Lee6 put her approach in the creek fronting the green, Lee converted the two-putt birdie and joined Karrie Webb, Jan Stephenson and Hannah Green as female Australian major champions.

“I'm speechless. I been waiting for this for so long. It just feels unreal to have won,” said an elated Lee. “Just even in the playoff, and all throughout today, I played really well to get myself in that position, and I’m just really happy.”

“I thought I could win,” Lee6 said through tears following her round. “Last hole is par-5, so definitely we have to make birdie. Second shot was terrible.”

Lee6 opened the day with a seemingly insurmountable five-stroke lead over Yealimi Noh, buoying by a record-tying 61 in the second round. She birdied the first hole, seemingly right on pace with her previous performances. But she carded bogeys at 3, 4, 5, 8 and 9 to make the turn at +4 on the day and for the first time since Friday, out of the tournament lead. Noh jumped to the top of the leaderboard at-15 when Lee6 bogeyed No. 9, with Lee right on her heels.

Lee opened her back nine with four consecutive pars, keeping close to Lee6 and Noh but not quite able to pull even. Her long-time caddie Jason Gilroyed provided the push she needed to start her late charge.

“Going down the 12th fairway, Gilly, my caddie was like, ‘You know, you have a chance to win your first major championship, so why don't you just like give it a go,’” said Lee. “I was like, ‘Yeah, I'm trying.’ But, yeah, no, we just kind of had that chat and then I was like, the next hole I birdied.”

From there, Lee was off to the races, birdieing 14, 15 and 16 to get to -17. After a clutch par save at No. 17, she birdied No. 18 to take the solo lead at -18, with Noh and Lee6 sitting in the middle of the fairway in the final group behind her. From 15 feet, Lee6 two-putted for birdie to force a playoff with Lee. Noh’s birdie putt to tie Lee just missed the edge of the hole, leaving her one heart-breaking stroke shy of the playoff.

“Just sucks because I didn't birdie a single par-5, and I had a lot of like 6-footers coming down to make,” said Noh, whose solo third is her career best finish in a major. “It's just like you always think about what you missed, but overall, it was really positive.”

For Lee6, it’s a story of what could have been. After holding the lead through 36 and 54 holes, she failed to bring home the victory, with Lee’s seven-stroke rally tying Karrie Webb and Patty Sheehan for the largest come-from-behind win in women’s major history.

"I wanted to show the Korean flag coming down for the Korean fans,” said Lee6, referencing the skydivers who traditionally carry the winning country flag into the trophy presentation. “I'm disappointed I couldn't get it done."

Ireland’s Leona Maguire shot a 10-under 61 in Sunday’s final round, joining Lee6 in tying Hyo-Joo Kim’s record-setting score for 18 holes at a major, male or female.

The 2021 Amundi Evian Championship marks the major’s return to the LPGA Tour schedule after it was not held in 2020 due to the COVID-19 pandemic. Rolex Rankings No. 1 Nelly Korda finished with eagle on No. 18 to cap her round of 67 and finished at -7 overall, tied for 19th. Defending Evian champion Jin Young Ko never recaptured her 2019 momentum and finished in a tie for 60th at +2.