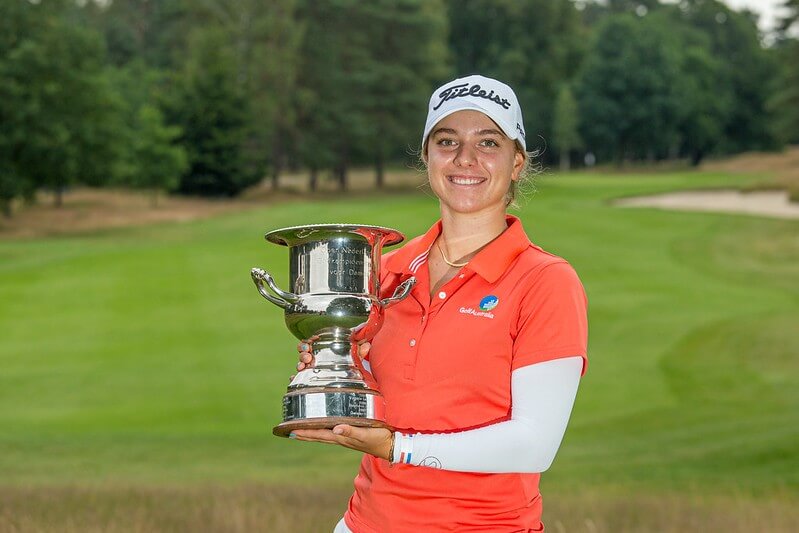 Australia’s Stephanie Kyriacou produced a bogey-free final round of 67 to win the Big Green Egg Open by two strokes and clinch her second LET title.

The 20-year-old rounded off an excellent week, which saw her card rounds of 66, 72, 65 and 67 to triumph with a score of 18-under-par at Rosendaelsche Golf Club.

The victory was also Kyriacou’s first as a professional having won the 2020 Geoff King Motors Australian Ladies Classic Bonville while still an amateur and she had her dad Nick on the bag with her.

“I’m buzzing! I forgot what it was like to win, it has been a little bit of time. There was some great golf out there, Sanna [Nuutinen] played really well, and she holed some really long putts. It was pretty tight, and I was a bit nervous,” said Kyriacou.

“It is something pretty special. He has been there since day one. He spent all his time and energy when I was little so to have him on the bag for a win is pretty special. All my friends stayed up to watch my score! I’m very grateful for the support team I have.”

Kyriacou got off to a great start when she birdied the opening hole and then rolled in back-to-back birdies on five and six to make the turn in 33.

The 2020 LET Rookie of the Year ended a run of nine pars with back-to-back birdies on 16 and 17 – the latter putting her back into lead.

But it wasn’t straightforward for the Australian on the last hole, as she had to recover from some wayward shots to make par.

She added: “I hit my drive a little right and then somehow hooked my second shot left. I don’t know what I was thinking, there was rubbish in front of me and I thought if I just chip this over and land it somewhere up there for a par putt and I did exactly that. It was a huge weight off my shoulders after that shot.”

Finland’s Sanna Nuutinen carded a final round of 69 which included six birdies and three bogeys to finish in second place on 16-under-par.

The Finn equalled her best-ever finish on the LET and thanks to her consistency in 2021, the result propelled her to the top of the Race to Costa del Sol rankings.

Scotland’s Kylie Henry produced a final round of 68 to finish third on 10-under-par, while Thailand’s Atthaya Thitikul was one stroke further back in fourth.

Dutch golfer Dewi Weber ended the tournament in fifth place with rounds of 69, 74, 69 and 68, and Austria’s Christine Wolf finished in sixth place.

German duo Laura Fuenfstueck and Olivia Cowan carded final rounds of 67 and 71, respectively to finish T7 while Wales’ Lydia Hall also signed for a final round of 67 for T9 alongside Germany’s Leonie Harm, England’s Ellie Givens and Scotland’s Carly Booth.