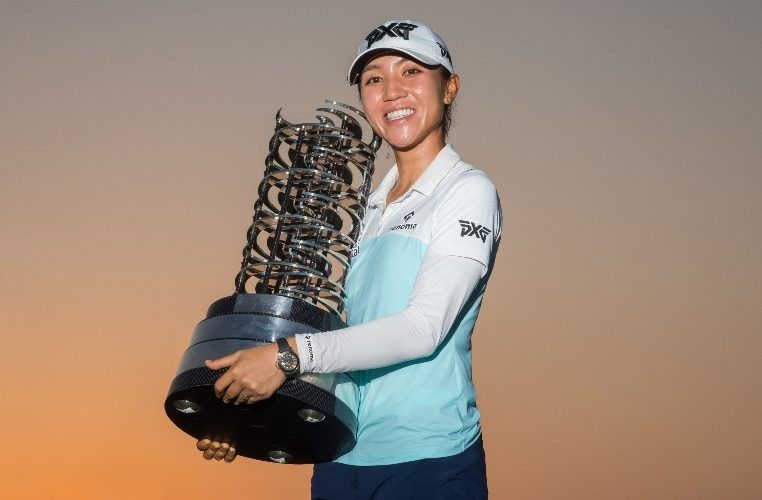 New Zealand’s Lydia Ko fired a final round of 65 to triumph by five shots at the Aramco Saudi Ladies International presented by Public Investment Fund.
Ko, who is seventh in the Rolex Women’s World Golf Rankings, began the day on 16-under-par and started well with a birdie on the first.
The two-time Major winner continued her fine form with birdies at five and seven before she sank an eagle putt on the par-five ninth to make the turn in 31 (-5).
Another birdie on the 10th gave Ko a six-shot lead and she rolled in her final birdie on the 13th to post a winning total of 23-under-par.
“When I was out there, I was just trying to play the best golf that I can. I knew a lot of the top names were playing really well and this is a golf course where there’s a fair amount of birdies, so I was just trying to have my fair share of them and have fun out there,” said Ko.
“It helps when you’re going into the final round with a four-shot cushion, you could shoot the same score as others, but you have those shots from the last three days.
“I birdied the first hole and holed two really good putts for par on two and three which really set the momentum up, and from there I tried not to look back and just go forward.”

Thailand’s Atthaya Thitikul rounded off another successful week on Tour with a second-place finish after a final round of 66 (-6).
Despite beginning her round with a bogey, the teenager rolled in a birdie on the second before an eagle on the fourth.
The 18-year-old made three more birdies on the front nine, only dropping a shot on the sixth to make the turn in 32 (-4) and Thitikul rolled in three more birdies and one bogey on the back nine to finish at 18-under-par.
“I just did my best out there today with every single shot, but Lydia was absolutely brilliant,” said the four-time LET winner.
“I learned a lot from her today, Lydia Ko has one of the best short games ever, her putting was brilliant, and every approach shot she played this week, I can definitely learn to get better from her."
As a result of finishing second, Thitikul has an unassailable lead in the 2021 Race to Costa del Sol with 3,264.46 points to her name.
Therefore, the Thai star has clinched the crown for the 2021 season and in the process becomes the youngest ever winner of the title.
“It’s an honour and it’s a really amazing feeling to win the Race to Costa del Sol this year in my rookie season as well, words can’t really describe it,” she added.
Tied for third place on 13-under-par was Spaniard Carlota Ciganda and England’s Alice Hewson, who shot rounds of 68 and 69, respectively.
Three-time Solheim Cup winner Ciganda said, “I think it’s been a great week; I love the course and it’s been a great setup for us. I played very solidly, I hit a lot of fairways and greens, I didn’t make as many putts as I would have liked to - some weeks they go in some weeks they don’t. I’m happy with the week - Lydia and Atthaya played amazing so hats off to them.”
It was a rollercoaster round for Hewson, who made the turn in 37 (+1) after two birdies, a bogey and a double bogey.
But the 2020 Investec SA Women’s Open champion bounced back once again with four birdies on the back nine to finish T3.
“It was a little bit up and down, I got off to a slow start once again, but I was pleased how I bounced back on the back nine and hung in there, I thoroughly enjoyed it,” said Hewson.
“I’ve had a really great week, I struggled a bit off the tee in the first few days but had a good debrief session with my coach on the range to straighten things out a bit, so overall it was positive.”
Germany’s Olivia Cowan and Australia’s Whitney Hillier finished in a share of fifth place on 12-under-par after shooting rounds of 66 and 67, respectively.
American Alison Lee and Spain’s Nuria Iturrioz were one shot further back in T7 with four players tied for ninth place including Australian Steph Kyriacou, who fired the joint-best round of the day with a 65.
In the 2021 Race to Costa del Sol, Thitikul has secured the title with two events remaining on LET calendar as she has 3,264.46 points.
A T9 finish for Finland’s Sanna Nuutinen puts her on 1,570.27 points with Kyriacou just behind on 1,562.74 points.
Slovenia’s Pia Babnik is fourth (1,409.89) with Norway’s Marianne Skarpnord in fifth (1,267.81) and Cowan moves up to sixth (1,209.68) with her T5 finish.