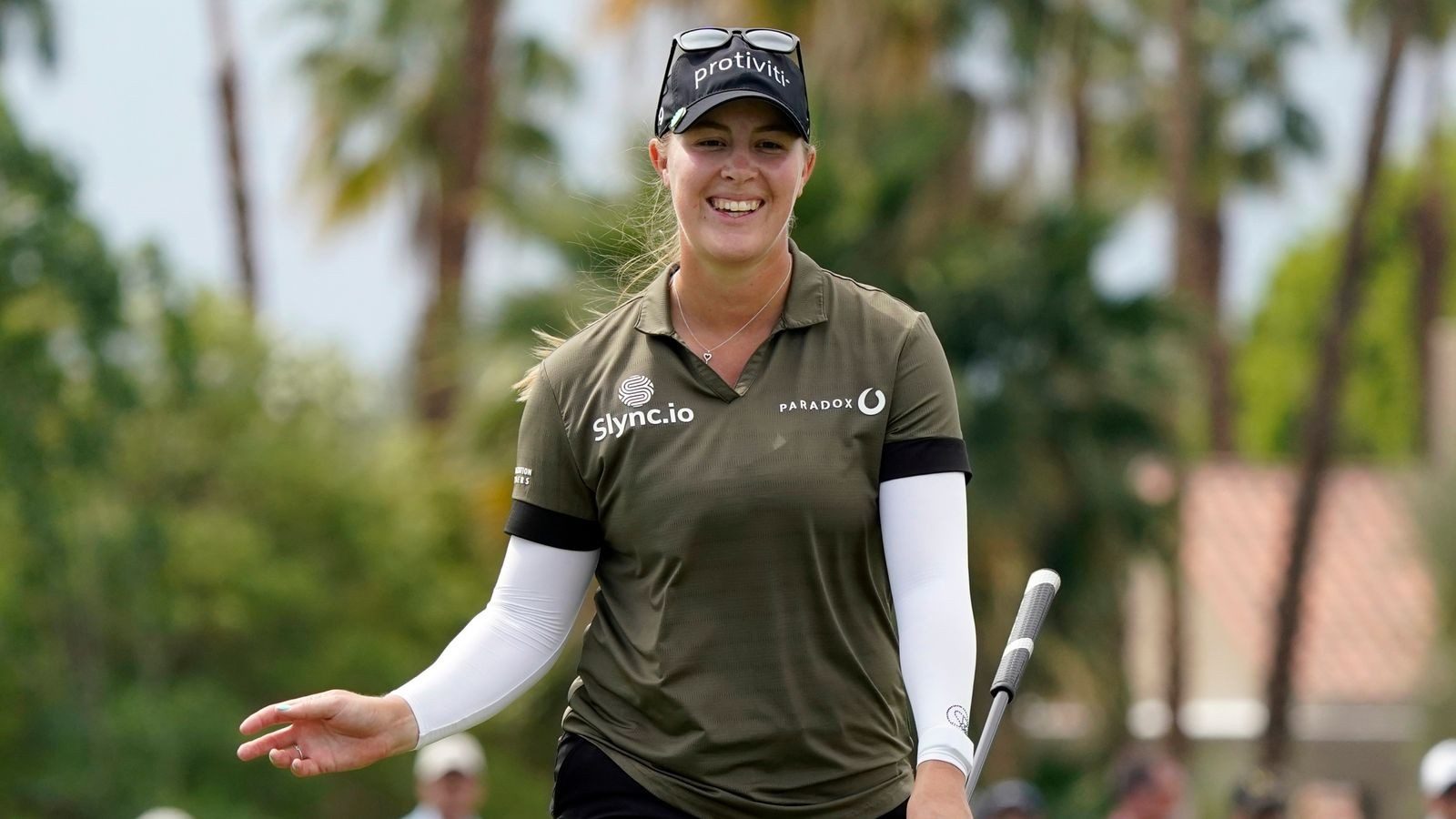 It was an historic Sunday at Mission Hills. As the sun set over the mountain landscape in Rancho Mirage, Jennifer Kupcho rose to occasion, cementing herself in major championship history forever. After holding a six-shot lead heading into the final day, Kupcho’s 2-over 74 was enough to keep the competition at bay and win The Chevron Championship, becoming the fourth Rolex First-Time Winner of the season and a major champion in the same breath. 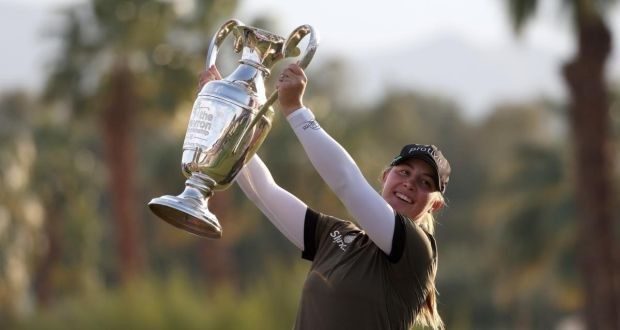 “I think it's surreal. To be a major winner is really special, and to be the last person here at Mission Hills to jump into Poppie's Pond, it's all really special,” said Kupcho, who is the 20th player to make The Chevron Championship her first major title.

It was still a grind to the finish for the 24-year-old, who battled through seven bogeys with five birdies, as fellow American and 2021 U.S. Solheim Cup teammate Jessica Korda in the penultimate pairing cut into her lead. But Kupcho kept her composure through the end to get the job done, becoming the first American to take the leap into Poppie’s Pond since Brittany Lincicome in 2015 and the seventh player to make the major her first win on Tour, just as Patty Tavatanakit did in 2021.

“I came out just trying to shoot a couple under. I mean, I had a six-stroke lead and I shot 8-under yesterday, so I figured if someone can do that, then they deserve to be in a playoff,” said Kupcho. “That was my mentality and what I was fighting for all day. Obviously didn't get there, but still pulled it out.”

Korda started strong with an eagle from the fairway on No. 2 along with two birdies on 11 and 12, and on the back nine she was two shots back of the lead heading into the par-4 15th. One bogey later and pars to finish out the final round, Korda ultimately finished in solo second at -12, her career-best finish in a major championship and the eighth runner-up performance of her career.

“I was further back starting than I wanted and bunch of lipouts, and it is what it is. Sometimes you got to be lucky to win majors, and I still haven't found that yet,” said Korda, a six-time LPGA Tour winner. “Second place is not bad after being 3-over through 7, so pretty proud of myself.”

The 18-year-old Slovenian Pia Babnik, in her sixth LPGA Tour appearance of her career, posted a 6-under 66 to finish third at Mission Hills. An eagle, five birdies and a lone bogey on Sunday’s scorecard garnered the two-time Ladies European Tour winner an exceptional memory for her young career in only her second time playing in the United States.

“I'm really happy with the round, with how I played. So, yeah, just really, really happy,” said Babnik, who is only a junior in high school. “It's been great. It's such course that you have to be patient, and that's something that I did. Overall really happy with how it turned out.”

Four players finished in a tie for fourth at -10, including 2021 Chevron champion Patty Tavatanakit, who played alongside Kupcho in the final grouping and shot an even-par 72 in the last round of her title defense. Major winners Hannah Green and Hyo Joo Kim were among four tied for eighth at -8 by day’s end in the desert, as the championship moves on to Houston in 2023.

Her voice didn’t crack, but Jessica Korda was emotional. The 29-year-old American came up just short at the year’s first major, finishing solo second in The Chevron Championship after a final-round 3-under 69 that saw two birdies and a hole-out eagle. It was a valiant effort, one she’s proud of, but Jess was still disappointed that it wasn’t her that got to make the last leap into Poppie’s Pond.

“I was further back starting than I wanted and had a bunch of lip outs and it is what it is,” said Korda who hit eight of 14 fairways and 13 of 18 greens in round four. “Sometimes you got to be lucky to win majors, and I still haven't found that yet. Second place is not bad after being 3-over through 7, so pretty proud of myself. I really wanted to win this one because I love this event. Pretty bummed that we're leaving, but I understand why. Excited for the championship going forward, but this is just such an awesome place.”

Jess’ second-place result is her best-ever finish in a major championship and after battling a rib injury at the start of 2022, her -12 performance says a lot about the direction in which her game is heading as the LPGA Tour looks forward to the rest of a meaty tournament schedule With her fellow U.S. Solheim Cupper Jennifer Kupcho taking the first major title, Jess is optimistic about where American women’s golf is headed as well as where she stands in that conversation, bolstered by her good play at Mission Hills’ swansong.
“I'm just trying to do the same thing week in, week out. I’m trying to figure some stuff out, and obviously trying to stay as healthy as I can. I always want to keep myself relevant, so keeping my name on top of the leaderboard definitely helps.

“It's been a long time coming, and I feel like all the hype around the ANWA as well, it's kind of stars aligned for Jen which is awesome. Seeing an American win a major is definitely going to shut some critics up for a little bit which is nice. American golf is doing great and she's definitely kind of the future of it.”

One of the best parts of the job is seeing them grow. The LPGA Tour has, for years, been about youth and moxie, teenaged winners and the fearlessness of youth. But if you’re out here long enough, you get to see the kids mature and develop. You get to witness the growth of a person, not just a pro. We’ve watched it with Lydia Ko, who we met as a precocious 15-year-old and who set every youngest-ever record on the books. Today, Lydia is an LPGA Tour leader, a board member who is a voice of wisdom at age 24.

We’ve seen it with the Kordas, who also won in their teens and who, now, have matured into seasoned champions, who win with panache and lose with dignity and grace.

And we’ve seen it with our latest major champion, Jennifer Kupcho, who hung on to win the final Chevron Championship played at Mission Hills Country Club. Despite a closing 74, a round that included five birdies and seven bogeys (although the last one, a three-putt bogey on 18, didn’t matter to the outcome), Kupcho not only defeated the field to become the second player in a row to make this major her first career LPGA Tour victory, she beat back her biggest challenger – her own volatility.

The knock on Kupcho has always been the knocks she puts on herself. When she first came out, she would bang her putter against her foot if she missed a 30-footer, a look that didn’t win her many friends among her peers or the fans who saw it. High expectations are one thing: flashes of temper on a semi-regular basis are far more destructive than good.

But whether it’s her newlywed status – Kupcho and her husband Jay Monahan, who caddies for Sarah Schmelzel, tied the knot in February – or a couple of years of maturity, the 24-year-old from Colorado seems to have found the right balance of fire and ice.

“I think I've matured a lot in the last year, and really ever since I've been out here,” she said. “I've been able to calm myself down a lot better. Obviously, I still have my spurts of anger. But I think that's how I get it out quickly and then move on. I think my whole mental game has gotten stronger.”

For read more on Jennifer Kupcho’s win, go to www.LPGA.com