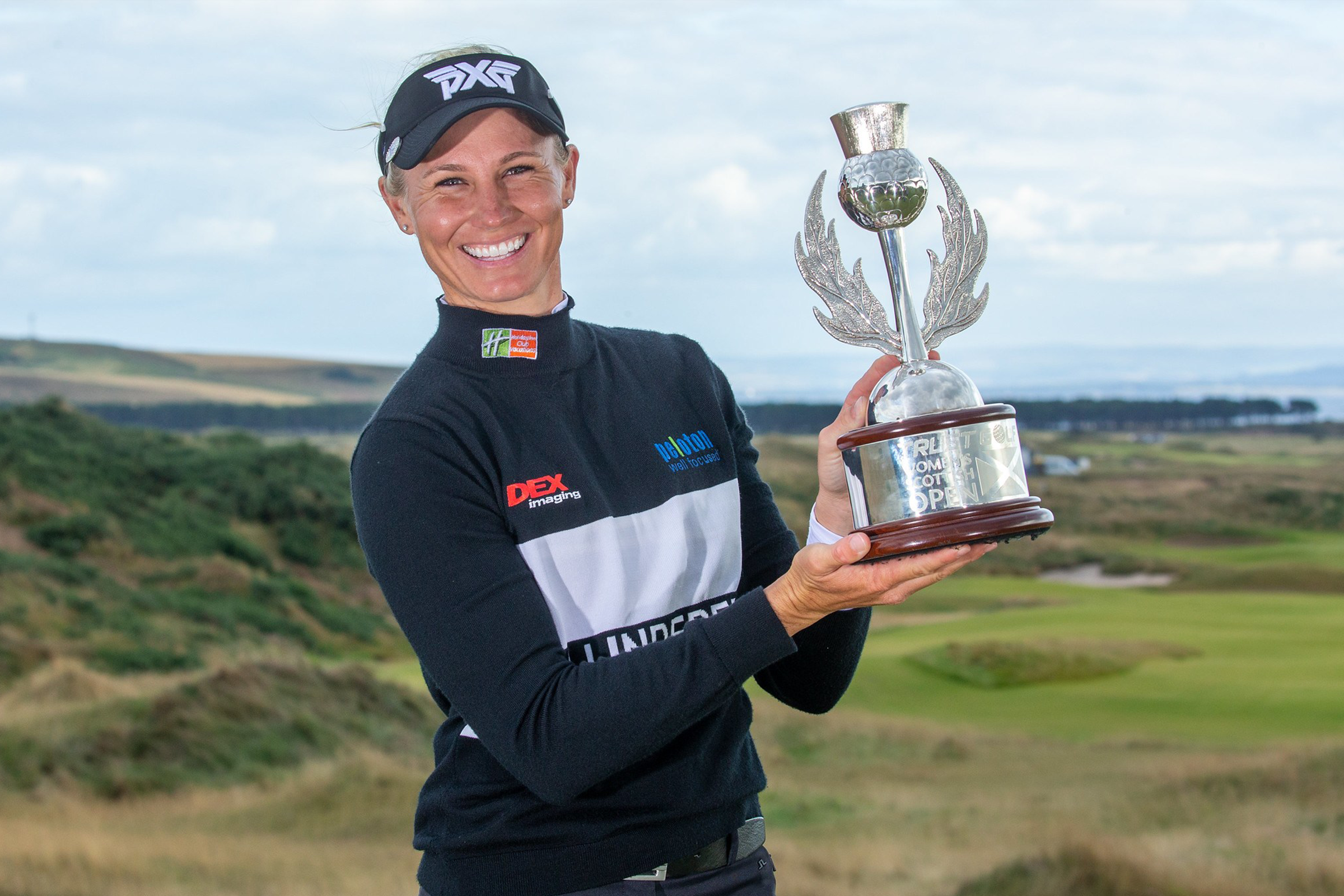 Ryann O’Toole is the 2021 Trust Open Women’s Scottish Open champion after producing a round of the highest calibre to finish top of the pile at Dumbarnie Links, and claim her maiden win on the LPGA and LET.

With this her 11th season on Tour, and 228th tournament, the win has been a long time coming for the 34-year-old, who shot a bogey-free round of 64 (-8) to see her lift the trophy on the Firth of Forth with a final score of -17.

After a riveting day of action which saw O’Toole battle it out with Race to Costa del Sol leader Atthaya Thitikul at the top of the leaderboard, the three-time Symetra Tour winner kept her composure on the final holes to take the win by three shots.

The duo were locked at the top of the standings for much of the day at Dumbarnie Links, as the pendulum swung one way then the other throughout a pulsating day of action, but it was O’Toole who took the win on an emotional day in Fife.

“I can’t even describe it,” she said. “I’ve been working my whole life for this and dreaming about it since I was a kid. I feel like it’s been ten years now, wondering when is it going to happen and I just feel like this year’s been very much kind of aligning and things are falling together.

“I tried to not look at the leaderboard. I tried to just trust in my caddie to guide me whether we needed to lay or get aggressive, stay patient or not.”

“I still feel like I’m in shock and the tears are going to come later when things die down. I’m excited and happy. The hours and grind and heartache this sport brings, the constant travel, for this moment, I hope it only happens again and again."

After heading into Sunday’s action a shot behind the leading group, Thitikul reeled herself into contention in the opening stages of the final round, with birdies on the second and third seeing her apply the pressure right from the off.

While Charley Hull and Ariya Jutanugarn couldn’t keep the pace of the teenage Thai talent, O’Toole continued to play the course with aplomb – securing birdies on holes one, two and four herself to make it a two-horse race at the top.

Thitikul also birdied the fourth, as well as the sixth and seventh to see her complete the front nine in 31, with O’Toole doing similar after completing the par-four ninth in three shots.

A bogey and two birdies from the Tipsport Czech Ladies Open winner saw her once again draw level at the top after hole 13, but O’Toole did exactly the same minutes later to restore her advantage.

Another birdie on 15 saw the American edge closer to lifting the trophy, before picking up another shot on 17 to give her a three-shot lead heading down the final hole of the tournament, which she maintained with a par to start the celebrations.

It wasn’t to be for Thitikul, who claimed her eighth top-ten finish of the season, but the 18-year-old was pleased with her performance nevertheless.

“I putted pretty well today and hit a pretty solid round, but it’s not enough for the win. I just know that I tried my best and I’m proud of myself already,” she said.

“I’m not a big fan of links, but I shot under-par every day, so for me it was about hitting the fairway, I like the fairways here.”

Lydia Ko produced one of the rounds of the day to finish tied for second spot (-14) in Scotland, with the Kiwi rolling in seven birdies and a fantastic eagle on the par-four 17th – which was playing at a shorter 266 yards today - to see her finish on 63 (-9) for the day.

“I think I played really aggressive — well, I tried to stay aggressive, and that’s been the mindset feeding off last week,” Ko said.

“All in all, I played solid and I think all you can do is just trust your game and I feel like a lot of good things are there.”

Overnight joint-leaders Jutanugarn and Hull couldn’t maintain their high standards of the opening part of the week, with the former shooting 68 (-4) to finish fourth on -13, while the latter finished a shot further back after a final round 69.

Elsewhere, it was a day to remember for Ally Ewing, who equalled Ko’s score of 63 (-9) to charge up the leaderboard and finish sixth in Scotland to equal her best finish of the season.

Eight birdies, one bogey and an eagle on 17 saw the Mississippian set the clubhouse lead on -11 earlier in the day before eventually being surpassed by the leaders, but such a positive round has left her full of optimism heading into the AIG Women’s Open next week.

Ewing said: “I felt like my game was in a place where I could go shoot a good number.

“Certainly nine-under is not something that you put in your head because they are just so few and far between. It’s a special round but a lot of good confidence momentum for next week.

“I’m excited. My game is in a really good place and can’t wait to see Carnoustie tomorrow. I love my time here and playing in Scotland is fun. It’s always a treat to play links golf, and I can’t wait for next week.”

Esther Henseleit and Celine Boutier were among the five players locked on nine-under-par to finish tied for seventh place at Dumbarnie Links, with the German star shooting a bogey-free 66, while France’s Boutier came home in 68 on the final day’s play.

Further down the field, there were also outstanding performances from Whitney Hillier and Manon De Roey on day four, with the former hitting her best round of the season with a 65 (-7) to finish T15.

Belgium’s De Roey went one better to shoot 64 (-8), with a run of five straight birdies from holes 13 to 17 contributing to her resounding score, as she played the course perfectly on Sunday with the gusts from earlier in the week dying down.

“I’m very pleased with the day,” she said. “It was windier than the other days so I took advantage of it a little bit. Everything worked out. I holed a lot of putts and hit it quite close.

“I think conditions were a lot better than the first three days, but getting to know the course and the bounces and like the hills and stuff, it really helped.

“My goal was to just move up the leaderboard today, so I think I did a pretty good job on that.”

Atthaya Thitikul extended her lead at the top of the Race to Costa del Sol standings after her second-placed finish, as she sits top of the board on 2,037.00 points.